31 Years and an Embryo Transfer

Well, this is definitely going to be a birthday to remember indeed! Today not only marks my 31st birthday, but today is also the day Brad and I will undergo our first IVF frozen embryo transfer. If you have been following along with me on Instagram stories, I’ve been pretty open and transparent thus far about the journey we have been on to get to today. I have shared bits and pieces of our story and you have all been so open and honest about your own struggles with fertility. I am honored to get to chat with each of you and help be a support for one another. In a society that chooses to keep fertility struggles private, I have vowed to be as transparent as possible with you. Some may think that this is a risky decision (especially for our hearts if things go awry), but I feel that God has placed it on our hearts to share it all with you. With that being said, I thought I would honor today with a little story about how we have to come to be where we are today.

This was the year that Brad and I planned to start trying to conceive. With over a year and a half of marriage under our belt, we felt like the perfect planners. Thinking we would get pregnant right away, we anticipated having a baby just a few months after our second wedding anniversary. We thought that sounded pretty darn great! I mean, don’t all our plans?

We went to the doctors, confirmed the pregnancy and scheduled our eight week ultrasound appointment. Around five and a half weeks, we lost the baby to a natural miscarriage. This sent us into a shock. Our perfect plan was shattered. However, our doctor assured us, as well as other women’s stories, that having a miscarriage the first go around is vey common for many women. It’s shocking that no one talks about any of this. Had I known other women’ stories, it would have saved a lot of guilt and fear. So with our hearts aching and our courage a little shaken, we pressed on with the journey to start a family.

We found out we were pregnant for the second time in April of this year. This time we were nervous, but thought maybe we just had buck luck that first go at it. So, we allowed ourselves to get a little excited still. Although to be honest, I’ve never truly felt excited ever since our first loss. It’s too hard to go there and feel that joy to its fullest.

This pregnancy made it a little further than the first, but we lost the baby just shy of seven weeks. At this point, our OB couldn’t provide us with the comfort we needed. We wanted answers. I mean, who wouldn’t right? While two subsequent miscarriages can happen to some women, it’s more rare. So, this is when we were referred to our fertility doctor.

After we grieved our second loss, Brad and I met with our fertility doctor for the first time. We went over our history and underwent numerous tests to try and locate some form of reason for our losses. We checked everything there was to check. I had two internal scans to make sure I had no issues to my lining, ovaries or uterus. Brad had to make sure there was no issue with his contribution. We underwent blood work and genetic screening tests. Everything took about two-three weeks to complete. After all the tests came back, we were told that everything was “fine.”

Now, you would think that a person would rationally love that answer, right? Great, no issues. But, it was actually the contrary. It devastated me to not find a reason. There was nothing to “fix.” There was no plan moving forward. No solution. This truly shook me to my core. I was terrified. Terrified to try again. Terrified we would go through another loss after being told we were “fine.” And again, having no reason as to why.

The only recommendation or plan that we left with was a prescription for progesterone – a hormone that helps build up the lining of the uterus. The “thought” was that maybe my lining was thin and that’s why the pregnancies didn’t stick. So, we went with it and left.

However, it was at this time, that Brad and I knew we needed to take a pause. For our mental and emotional wellbeing, we took a break.

It was during these six months, that Brad and I got back to us. We went on trips (including an amazing trip to Hawaii) and took the time to get back to having a little fun – without the worry and anxiety that came with trying again. I am not going to lie and say that having a baby wasn’t always on my mind. There were times that I felt selfish for needing time. I had guilt that I wasn’t being strong enough. But, looking back on those months, I think of it as a time that God gave us to find a little joy again. To let us heal and find strength. Which we did. Then we were ready.

This time in our story came with a lot of fear. After taking six months to get back to normal life, Brad and I didn’t get pregnant for a solid 6 months of trying again. Not that this is a terribly long time, but compared to how fast the first two times were, I was a bit freaked. And man, did the guilt really set in. I had so many fears that I waited too long and should have started trying again right after the second loss. It’s crazy what our minds allow us to think and the dark places that we can take ourselves when we are scared. Truly the power of the devil working diligently. I questioned God and why He would allow so much heartache and disappointment after already having so much loss. It was a dark time. But, we kept praying and kept trying.

We found out that we were pregnant in June. To say that I was a bundle of nerves was an understatement. However, with this go around, our OB was watching us a little more closely. Something that I truly appreciated. If he would have agreed to move into our house with the ultrasound machine, I think we would have let him.

Knowing that we were scared and concerned, he told us to come in at the six week mark just to see how things were looking. This was the first time that Brad and I went for an ultrasound (we’ve never made it to the eight week scan). It was at this appointment that we saw the heartbeat. I don’t know how to describe the feelings that we had. We were overcome with joy to actually see a heartbeat for the first time, but it was so overshadowed with fear. It was terrifying.

Our OB went on to tell us that the success rate is so high once the heartbeat can be seen and that we should allow ourselves to be excited. I just couldn’t quite get there. The fear and worry was so strong. That following week, we went in for a seven week scan to find that the heartbeat was gone. We lost the baby two days later.

Honestly, that was it. If I could have marched right over to the fertility doctor’s office and cried, I would have. But, we took the time to grieve our loss and waited for our appointment. We sat down with the doctor and discussed options. Clearly, my issue was not due to progesterone and a thin lining because I had a loss while on all the progesterone hormones. It was at this meeting that we knew in vitro fertilization was our only route moving forward.

This is a common question I get asked by people. Considering that we get pregnant just fine, what is the point of going through this process? After our three losses with no scientific reason as to why, our doctor believes it is due to genetically poor embryos. Meaning, from the time of conception, there are genetic abnormalities that will result in the loss of the pregnancy during the early stages of development. This was his best hunch as to what could be wrong. The poor guy. When I stare at him from across the desk and beg to get answers, this is what he advised.

Through the IVF process, doctors are able to hand select an embryo and genetically test it for any type of genetic abnormalities. We learned that about 70% of miscarriages are due to this. So, selecting an embryo and transferring a known genetically good embryo is the best chance at a viable pregnancy. Eliminating this poor genetic factor takes the success rate up to 70-80% if the embryo takes. 30% of miscarriages occur due to developmental problems. Still a major concern of ours.

While I’m not going to dive into the entire IVF process just yet (I’ll save that for a different post), the past four months have been full of hormonal ups and downs, an egg retrieval procedure, genetic testing and the discovery that we were only left with one genetically good embryo at the end of this round. Not the ideal outcome. Apparently, I have poor quality eggs, resulting in a large number of abnormal embryos with genetic issues. My ovaries are older than me. Still don’t know how that’s even possible. But, we DO have our little one that made it to the end. Little E.

Today, we are going to transfer that embryo and pray like crazy. Throughout this entire journey, my faith has been shaken. I’m not going to lie and say that I was always happy with God. There were days that I held onto so much anger and resentment towards Him. Lots of, “Why us?” and, “Why is it so easy for everyone else?” It’s human nature to fall into these holes, right?

But even throughout this journey, I know that God’s hand has been in all of it. Maybe not the way we had pictured. Definitely not according to the plan we had laid out for our lives. But, He has been working in it and through it. We trust that His plan far exceeds our own and that He does all things out of love for those who love Him. So, today, we are going in with trust and through faith. Let’s go, little E!

I will walk by faith even when I cannot see. -2 Corinthians 5:7

Thank you so much for all your continued love, support and prayers. They mean the world to us. -E&B

If you are struggling with a loss(es) or going through fertility struggles and need to talk, please know you can reach out. I’d love to be there for you and help in any way.

View all posts by winkandatwirl 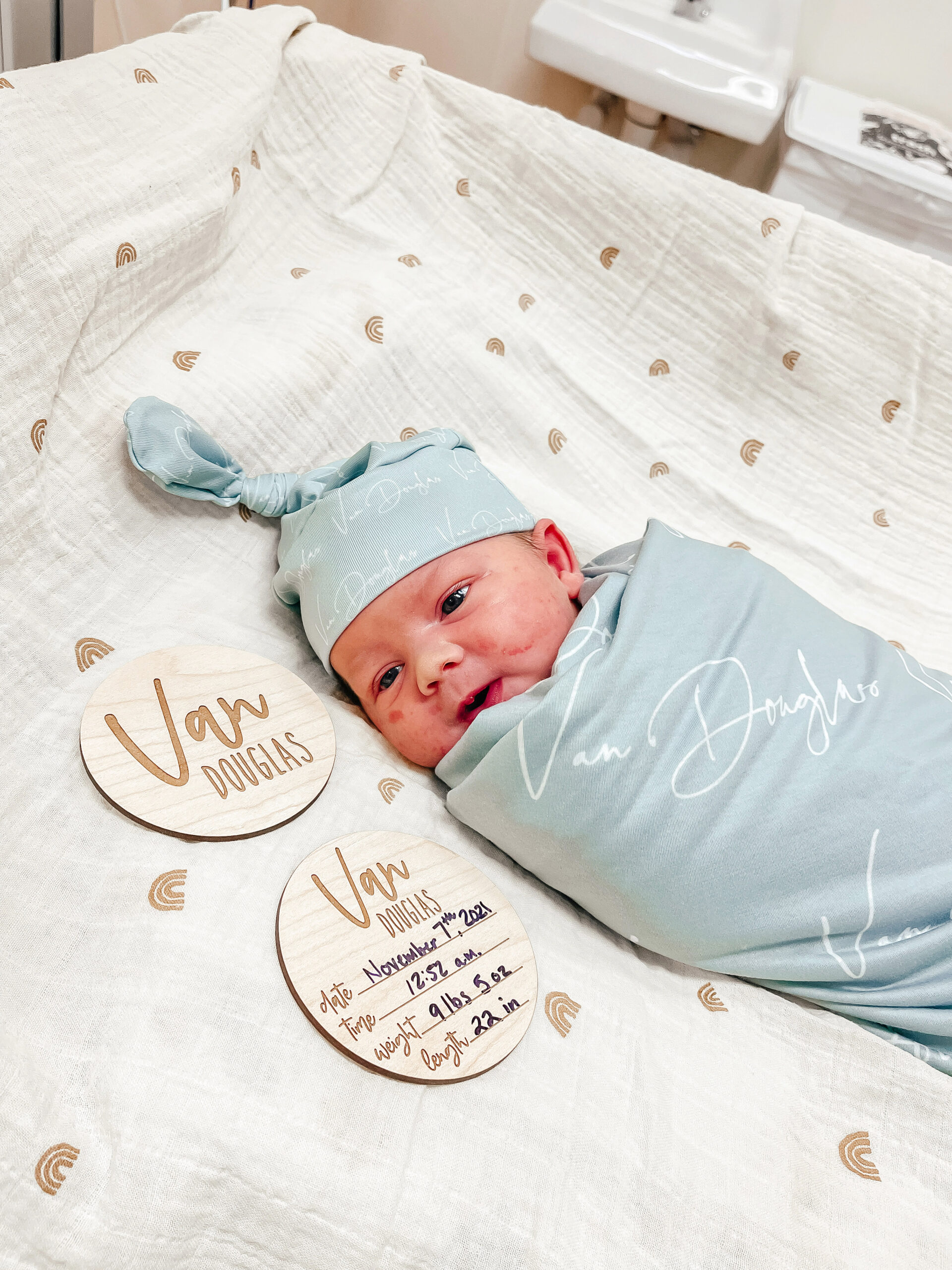 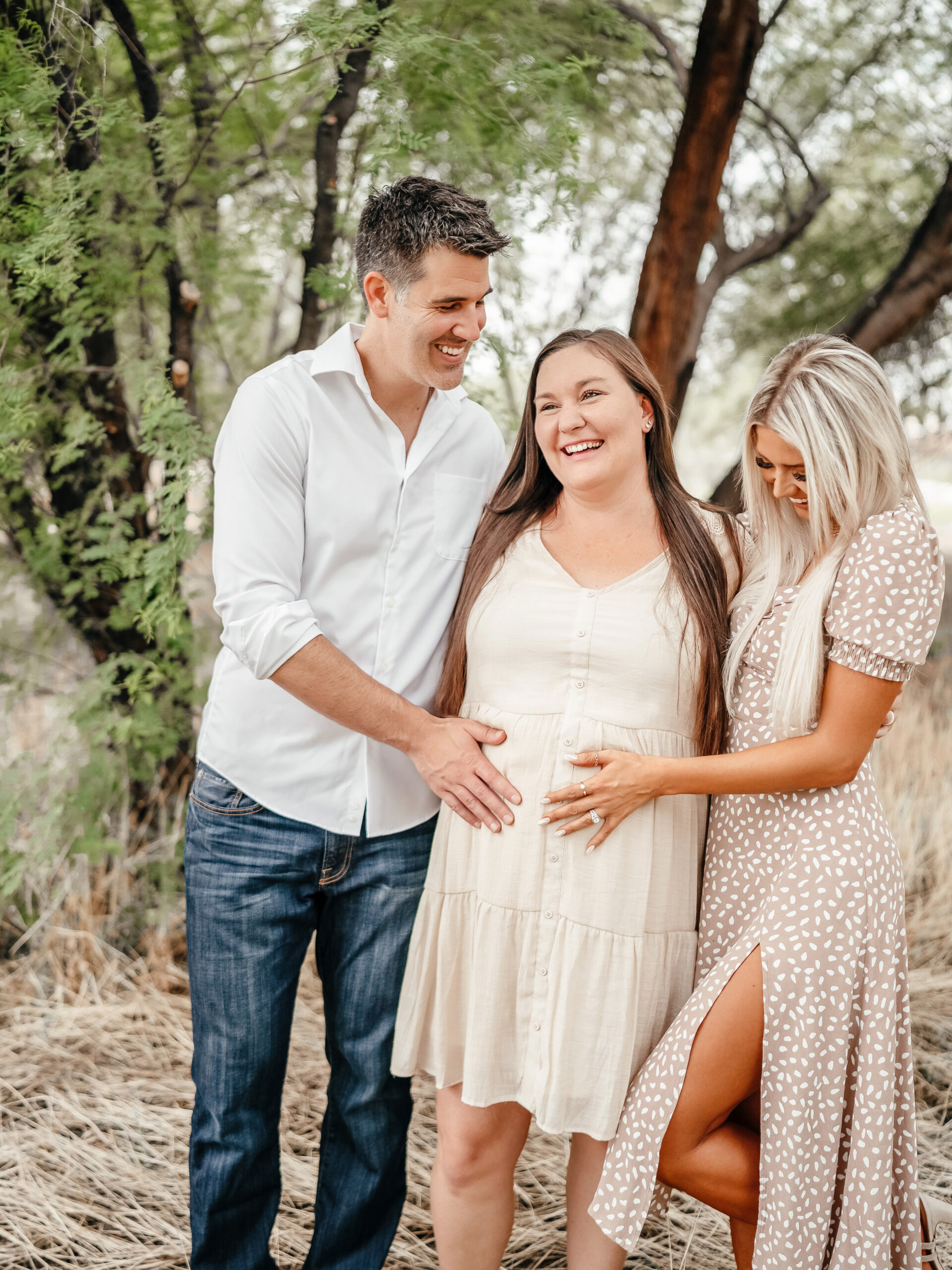 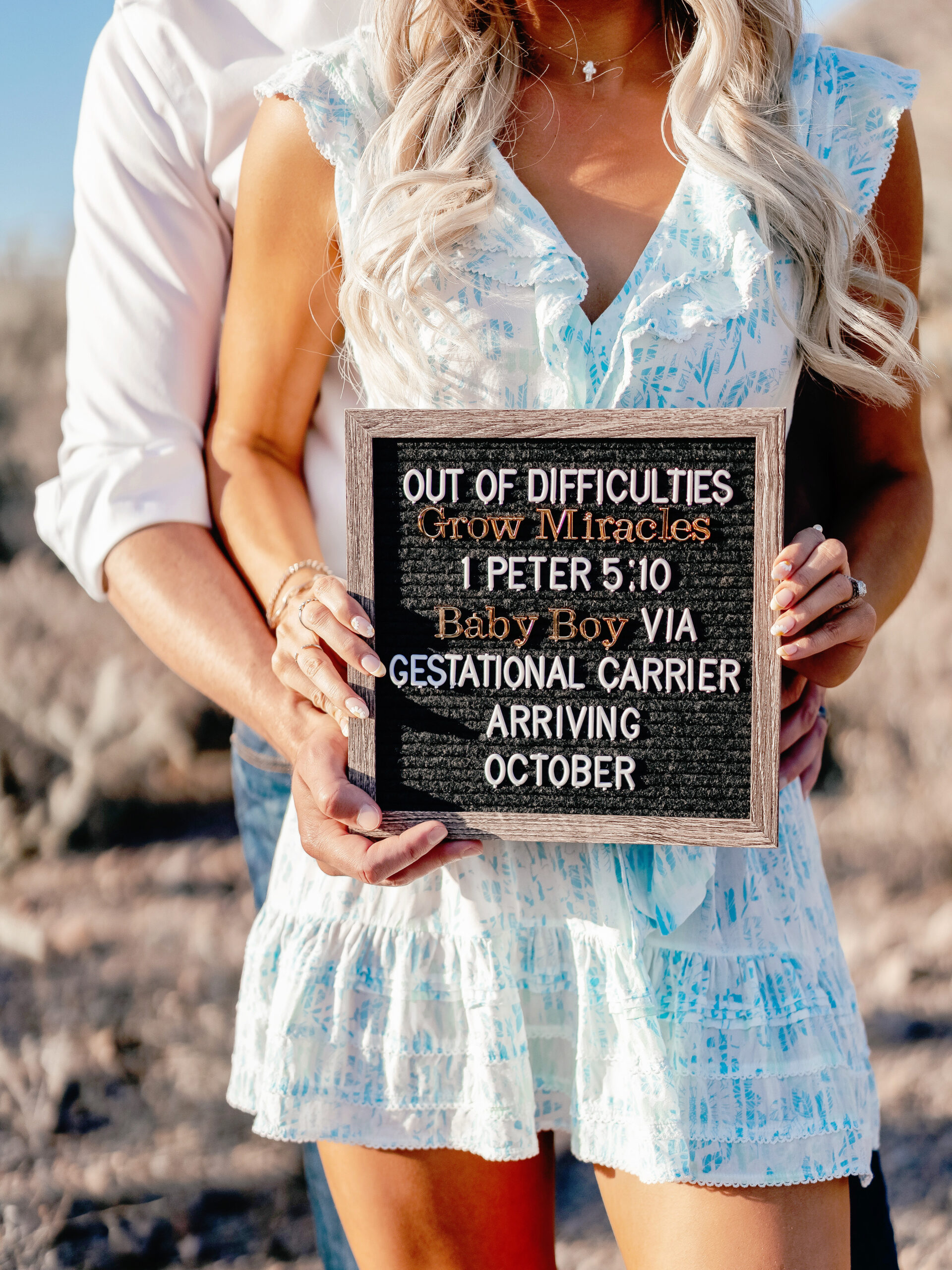 We’re Having a Baby Boy! 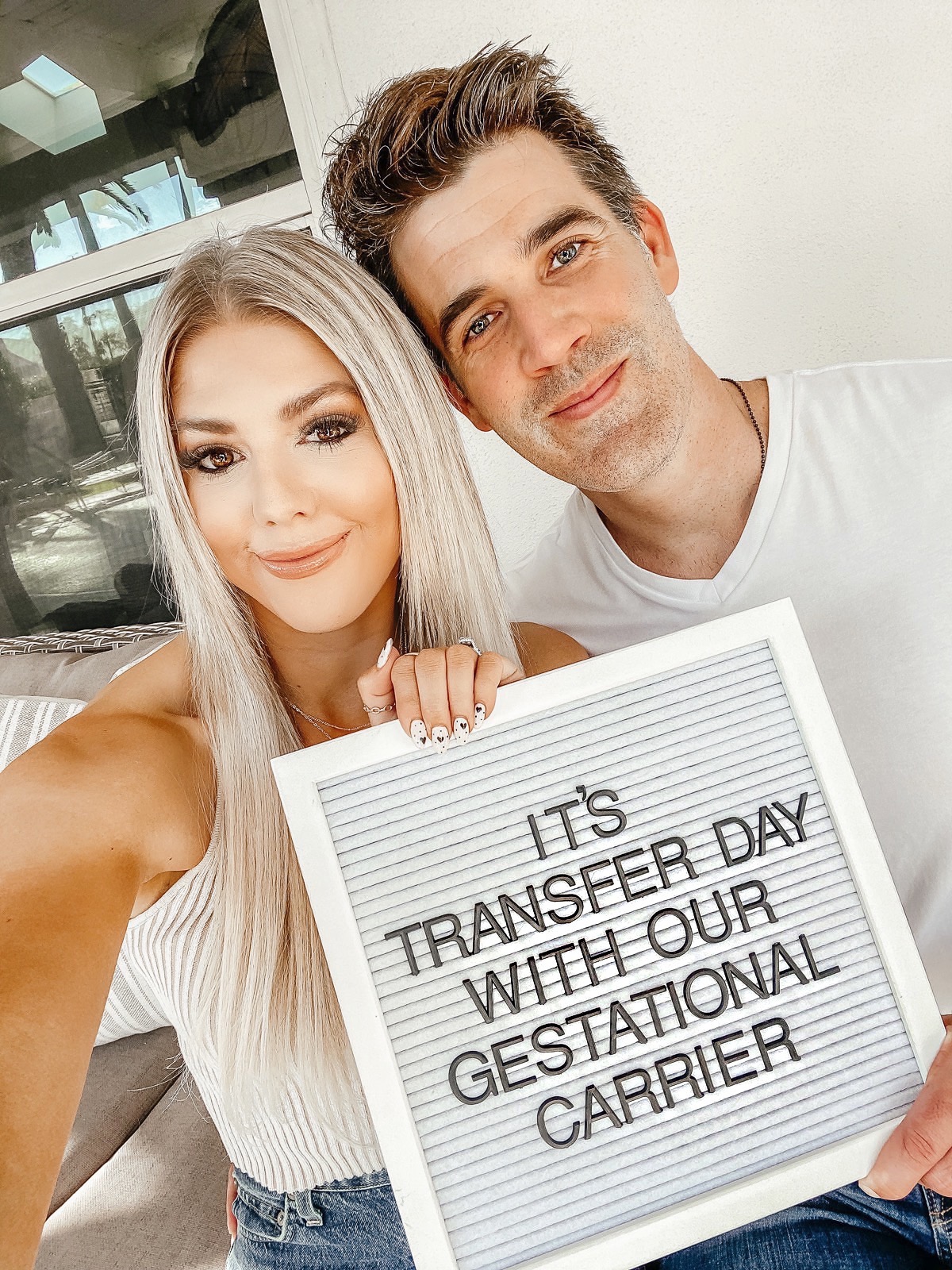 We Have a Gestational Carrier

8 thoughts on “31 Years and an Embryo Transfer”

Please add Widgets in Right Sidebar to show it here.

Copyright © 2022 Wink and a Twirl. Theme by Qdonow Themes.